South Weber City has a rich and interesting cultural and religious history. South Weber was first settled in 1851, four years after the Mormon pioneers arrived in Utah. The Bybee and Watts families were the first settlers. Church meetings were held in their houses until the South Weber ward was organized in 1853. Thomas Kington (sometimes spelled Kingston) was the first bishop and meetings of the new ward were held in the small South Weber School. At that time South Weber and Uintah were both in Weber County and met together for church. During the early years, baptisms were performed in irrigation ditches and the Weber River. There was only one baptismal service each year, in the summer months, for all of the children who had turned eight years old since the last baptism. 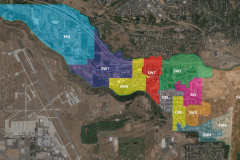 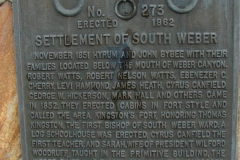 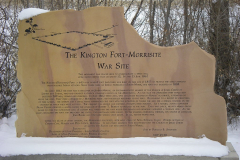 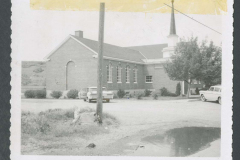 In 1884 South Weber’s first LDS meeting house was built, with a seating capacity of 100. The small building was open with a large coal-burning stove in the middle. Floor to ceiling curtains were used to divide the room into Sunday school and mutual meeting spaces when necessary. The first Thursday of every month was Fast Day. On that day members of the ward paid their tithing, fast offerings, and building maintenance funds by giving non-perishable produce to the bishop. The bishop redistributed those items to ward members in need and the excess was delivered to the Bishop’s Store House for use throughout the stake. In 1900 there were 209 members of the South Weber Ward including 13 High Priests, 4 Seventies, 19 Elders, 3 Priests, 18 Deacons, 104 lay members, and 46 children under 8 years old. In 1921 the South Weber Ward organized a scout troop with Raymond Ray as the first Scoutmaster.

In 1951 the old meetinghouse was replaced by a new red brick building located on South Weber Drive. It consisted of a chapel, cultural hall, kitchen, several classrooms, and one bishop’s office. In 1967 the South Weber Ward was divided to form the South Weber 1st and 2nd wards. Those two wards met in the old building for another 7 years. In 1974, that building was demolished and many of the bricks were used to construct the current South Weber Drive building near the city park and elementary school. David O. McKay, counselor in the church’s first presidency and a Huntsville native, dedicated the building.

In 1980 the South Weber 2nd Ward was divided to create the 2nd and 3rd wards. The 3rd ward was divided again to create the 4th Ward in 1986. Since then, eight additional wards have been created for a total of twelve. In addition, a young single adult (YSA) ward was created in 2004 and is now part of the Syracuse Utah Lake View YSA Stake. 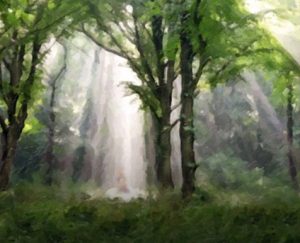